Copyright: © 2016 Takagi S, et al. This is an open-access article distributed under the terms of the Creative Commons Attribution License, which permits unrestricted use, distribution, and reproduction in any medium, provided the original author and source are credited.

Acute liver damage induced by the administration of carbon tetrachloride is characterized by lipid accumulation in the liver and changes in the plasma free amino acid profile. The major objective of the present study was to clarify the relationships between liver lipid levels and plasma free amino acids, and to estimate liver lipid contents via the concentrations of plasma free amino acids. Mice were administered with carbon tetrachloride or olive oil. Liver and plasma samples were obtained before (initial value) and after 1, 3 and 7 days of administration. Liver triacylglycerol increased at 1 day and total cholesterol was raised at 1 and 3 days post injection of carbon tetrachloride, and thereafter both returned to their initial values. L-Phenylalanine, L-serine and L-alanine were significantly increased, but L-arginine was significantly decreased at 1 day. Liver triacylglycerol and total cholesterol levels were linearly, but weakly, correlated with several amino acids. Thus, stepwise regression analysis was applied and we found that the liver triacylglycerol level could be estimated by the levels of free plasma L-histidine, L-methionine and L-phenylalnine, and that the liver total cholesterol could be estimated by the levels of L-glutamine, L-valine and L-phenylalnine. In conclusion, the increase in plasma free L-phenylalanine plays an important factor in the accumulation of liver lipid induced by acute treatment with carbon tetrachloride in mice.

The liver acts as a vital organ for different metabolic activities, such as carbohydrate, lipid and protein metabolism, which are interrelated with one another. The interrelationships among these metabolic processes can be confirmed when there are injuries to the liver and/or abnormalities in it, when simultaneous disturbance in functions occurs. Liver cirrhosis most commonly occurs as a result of alcoholism, but some poisons such as carbon tetrachloride and viral diseases can also induce liver cirrhosis. Among poisons, carbon tetrachloride is widely used for experimental cirrhosis.

In the case of protein metabolism, as a result of hepatic insufficiency due to carbon tetrachloride the plasma free amino acid levels were distinctly abnormal. Most of the amino acids except the branched chain amino acids (BCAAs) (i.e. valine, leucine and isoleucine) are metabolized in the liver. The BCAAs are mainly metabolized in the muscle. Among the amino acids metabolized in the liver, the increased plasma level of aromatic acids (AAA) such as phenylalanine and tyrosine is referred to as an indicator of liver disease [2]. Fischer et al. [3] proposed the ratio of the sum of the plasma BCAA levels divided by the sum of the plasma AAA levels, and this ratio was recognized as Fischer’s ratio. This ratio showed an excellent correlation with a grade of encephalopathy. According to Muratsubaki and Yamaki [4], not only plasma AAA but also most of the plasma amino acids other than arginine were significantly increased in rats through carbon tetrachloride treatment.

As mentioned above, carbon tetrachloride strongly influences lipid and amino acid metabolism in the liver. However, the relationships between accumulated levels of lipids in the liver and plasma free amino acid concentration have not yet been clarified. To clarify this issue, the correlation between liver lipid levels and plasma free amino acid levels in mice was determined after challenging the mice with carbon tetrachloride.

Six-week-old male ICR mice (Japan SLC, Shizuoka, Japan) were housed in conditions including room temperature at 22-23°C, humidity at 50-60% and a 12-h light-dark cycle (8:00-20:00); they were housed individually, and had free access to a commercial diet (MF, Oriental Yeast Co. Ltd., Tokyo, Japan) and water.

Experimental procedures followed the guidelines for animal experiments of the University of Nagasaki (No. 26-15).

Blood was collected from the carotid artery into tubes containing heparin sodium (AY Pharma, Tokyo, Japan) once the mice had been decapitated after cervical dislocation. To obtain a plasma sample, blood was centrifuged for 20 min at 850×g. The liver was then removed and weighed. The plasma and liver samples were stored at -80°C until the analysis of lipids and free amino acids took place.

Each sample of plasma was filtered through an Amicon® Ultra centrifugal filter (0.5 ml 3K, Merck Millipore, USA) and centrifuged at 14,000×g for 15 min. Supernatants of 10 μl were used. Both the L- and the D-amino acid contents were measured by a UPLC system (the AcquityTM UPLC system was comprised of Waters Binary Solvent Manager, Water Sample Manager and Waters FLR Detector) with an ACCQ-TAGTM ULTRA C18 1.7 μm 2.1 × 100 mm column (Waters Corporation, USA). The excitation and emission wavelengths for fluorescent detection of amino acids were 350 nm and 450 nm, respectively. The system was operated with a flow rate of 0.25 ml/min at 30°C.

All of the lipids in the liver were extracted using the method of Folch et al. [5], with some modification. A chloroform/ methanol (1:1, vol/vol) solution (12 ml) was added to the liver sample, followed by homogenization. Chloroform (6 ml) was again added, followed by homogenization. The mixture was left for 30 min at 40°C, and filtered. A chloroform/methanol (2:1, vol/vol) solution (2 ml) and distilled water (3.6 ml) were added to the filtrate, and the mixture was stirred. The mixture was left for one day at 4°C in order to separate it into two distinct phases, and the lower phase was collected. The lower phase was dried with a nitrogen gas-evaporator, and the dried extract was diluted with 5mL isopropanol, followed by assay using triacylglycerol and cholesterol determination kits, respectively (Triglyceride E-test wako and Cholesterol E-test wako, Wako Pure Chemical Industries, Ltd., Osaka, Japan). These absorbances were analyzed by Epoch (BioTek Instruments Inc. Vermont, USA).

Data from the same treatment were analysed by one-way analysis of variance, including the initial value. When significant effects were found, the values were compared by the Tukey–Kramer test. Statistical significance was set at P < 0.05. The results are shown as means ± S.E.M. Using the data of all the mice, simple regression analysis was carried out between the liver triacylglycerol or total cholesterol contents and the plasma free amino acid concentration, after which stepwise regression analysis was also applied. Figure 1: Changes in liver total cholesterol and triacylglycerol after administration of carbon tetrachloride in mice. Open and closed circles indicate the control and the carbon tetrachloride–treated mice. Different letters for the same treatment indicate significant difference at P < 0.05. Figure 2: Changes in plasma amino acid and Fischer’s ratio after administration of carbon tetrachloride in mice. Open and closed circles indicate the control and the carbon tetrachloride–treated mice. Different letters for the same treatment indicate significant difference at P < 0.05.

Structural disorganization of the endoplasmic reticulum with loss of function of microsomal enzymes, including the cytoc hrome P-450 monooxygenase system and glucose-6- phosphatase, occurred coincidentally with the onset of the conditions leading to the fatty liver [6]. This loss of microsomal enzyme function may be due to the inhibition of enzyme synthesis, since protein synthesis was rapidly retarded by carbon tetrachloride [7]. Retarded protein synthesis influences the plasma free amino acid pool. In particular, this phenomenon is characterized by a decrease in BCAAs and an increase in AAAs: the BCAAs are catabolized by both fat and muscle and the AAAs cannot be catabolized by the damaged liver [8]. In the present study, AAAs in the form of Lphenylalanine and L-tyrosine were significantly increased, but no BCAA was modified after administration of carbon tetrachloride. We calculated Fischer’s ratio, which was significantly decreased at 1 day. However, this was due to the increase in AAAs without a reduction in BCAAs. Holecek et al. [9] compared plasma free amino acids of rats with carbon tetrachloride–induced acute liver damage and carbon tetrachloride–induced liver cirrhosis. In the case of acute liver damage, they reported extreme elevation of most amino acids, including BCAAs, a profound decrease of arginine and an unchanged Fischer’s ratio. On the other hand, the liver cirrhosis increased the levels of AAA, methionine, ornithine, asparagine, and aspartate, and decreased the BCAA concentrations. As a result, Fischer’s ratio decreased significantly. Muratsubaki and Yamaki [4] reported that carbon tetrachloride induced acute liver damage in rats, with all amino acids (except for arginine, which disappeared) significantly increasing and with Fischer’s ratio significantly decreasing. We used mice in the current study, which differs from previous reports on rats. Thus, differences in species, doses of carbon tetrachloride, severity of liver damage, nutrition and so on may explain the different responses found among experiments. In the present study, L-alanine and Lserine specifically increased with administration of carbon tetrachloride. Both amino acids are gluconeogenic amino acids and L-alanine has a key role in this process. The kidneys, gut and muscle provide alanine, and the kidneys also provide a major source of serine for uptake by the liver [10]. However, carbon tetrachloride inhibited liver gluconeogenesis [11]. As a result, plasma L-alanine and L-serine levels increased.

In conclusion, the liver lipid contents could be estimated using the plasma free amino acid concentration following the administration of carbon tetrachloride. In case of acute liver damage induced by the administration of carbon tetrachloride, plasma free L-phenylalanine was an important factor for accumulation of both triacylglycerol and cholesterol in mice. 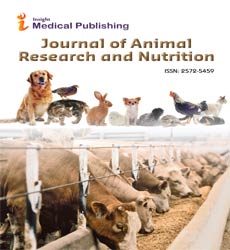